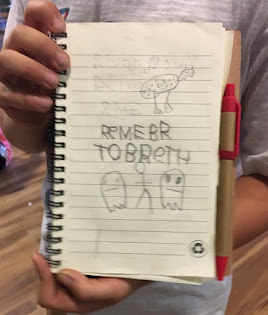 Young writers from the Boys & Girls Club of Souhegan Valley wrapped up a four-session mindful poetry writing workshop this week. Below are six poems they wrote in small groups as part of a Mindful Eating for Description activity.

Poem #1
Ode to the Blackberry
It feels like a blueberry:
little circles on the entire thing.
It's bumpy like a mountain,
bumpy like a giant pile of little rocks.
Its colors remind us of Earth.
It's bumpy now, but like just one rock.
Dark in color, like the night sky.
We could probably climb up the stem,
though climbing it would make the berry pop,
and a river of juice would come down the mountain.
Poem #2
Ode to an Oreo
You look nice & tasty--
You have a creamy filling.
No, you have a fuzzy filling.
You have pretty designs.
Poem #3
Ode to the Grape
It's brown where a stem once was.
Black little dots like dirt or bugs.
The grape rolls all over the mouth:
It's confusing. It looks like a green cat
running all around the room.
Now it feels like a dried fig
or a tiny apricot. Grape,
run like crazy from people
or you'll be eaten!
Poem #4
Ode to the Oreo
This Oreo is like wood.
This Oreo is like metal.
It feels like black sand,
sand which once was an enormous rock
crushed by the sea.
The cream in the middle
is like the winter sky,
like a snowflake
that's great for a snowflake pie.
It stays alive.
It gets cut into half, the three parts,
and the parts keep breaking.
It stays alive and marries another rock!
Poem #5
All Mixed Together Ode
The grape: it's like there's liquid inside of it.
The Oreo: eating the cookie, it turns brown.
Future cavities!
The Dorito smells like nacho corn chips.
Back to that grape. It's hard like a rock.
The frosting in the cookie looks like
milk in a bottle.
Dorito chip: you smell spicy!
Poem #6

The grape: a prose poem

Popular posts from this blog

Call for New Anthology for NH Poets: Poetry in the Time of COVID

March 30, 2020
Poetry in the Time of COVID: Resilience, Community, and Connection
New Hampshire’s Poet Laureate, Alexandria Peary, is thrilled to partner with Kirsty Walker, President of Hobblebush Books, for a special opportunity for all New Hampshire residents to celebrate April as National Poetry Month during this unprecedented time of COVID-19.
Build Community and Grow Your Writing
Alexandria Peary will facilitate a free, virtual writers’ group during the month of April. This will provide New Hampshire residents a channel for creatively navigating our common experiences. We may be isolated in our homes, but we will come together in this unique way and build an even stronger community.
The group will:
·build community during a time of isolation, ·provide writing prompts related to COVID-19 and our “new normal,” ·offer encouragement and actionable feedback, and ·prepare participants to submit their work for possible inclusion in an anthology published by Hobblebush Books
We invite all New Hampshire poetry …
Post a Comment
Read more

June 22, 2020
Submit-a-thon!
Find the encouragement you need to take your next steps toward poetry publication through this lively community event. Whether you’re a seasoned published author or this is your first-time sending poems out, this online event will maximize your submission experience. Dive into the fall 2020 publishing scene by sending your work to two, four, eight, twelve places within an hour! Join your host, New Hampshire State Poet Laureate, Alexandria Peary with co-host, former Poet Laureate of Portsmouth, Mike Nelson along with your fellow New Hampshire residents as we usher more of the state’s poetry—your poetry—into the publishing world:·Find literary journals for your work·Exchange tips on cover letters·Set up your Submittable account·Gain advice on dealing with literary rejection·Cheer on your fellow writers as they send out work·Enjoy cameo appearances by well-known poets who’ll drop by to give encouragement·Participate in publishing games for prizes!
Who: Open to New Hampshire …
1 comment
Read more

August 21, 2020
Save the Date! On Monday, September 21, 2020, at 7 PM, join writers from across New Hampshire as they read from COVID Spring: Granite State Pandemic Poems, the anthology edited by New Hampshire Poet Laureate Alexandria Peary, published by Concord's own Hobblebush Books.
This event is sponsored by the Center for the Book at the New Hampshire State Library. Mary Russell, Director of the Center for the Book, will give opening remarks, joined by Kirsty Walker, publisher of Hobblebush Books, and Alexandria Peary. Plus a possible surprise guest appearance! Our readers for the evening are Marie Harris, Mark Decarteret, Dianalee Velie, S. Stephanie, Amber Rose Crowtree, Ala Khaki, Katrina Grella, Marjorie Moorhead, Andrew Periale, Melanie Chicoine, John Lindberg, Jody Wells, and Carol Westberg. This reading will be held on Zoom. Space is limited to 300 audience members. Save your spot early! Please follow these exact steps for RSVPing:Email Alex at Balconyofwords@gmail.comIn the subject l…
Post a Comment
Read more 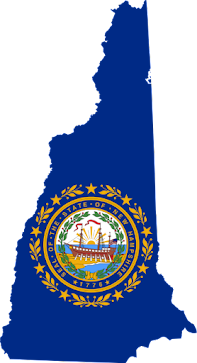